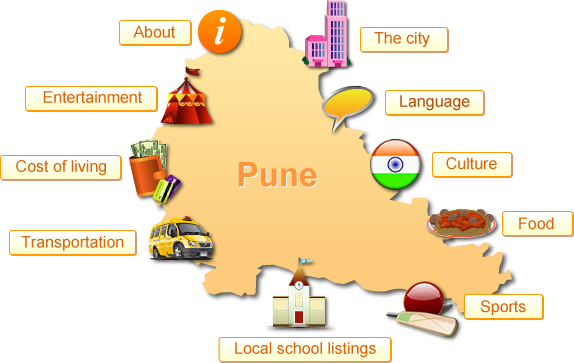 Located in the state of Maharashtra, Pune is a city with a population of 55 lakh. Called the Queen of the Deccan for its high location on the Deccan Plateau, the city is only 100 kilometers east of the west coast and 160 kilometers away from Mumbai by road. A six-lane expressway connects the two cities.

Known as a spiritual center, Pune is also home to information technology (IT) companies such as IBM, Tata Technologies, Infosys Technologies Ltd. and Wipro. Contributing a Gross Domestic Product (GDP) of 48 billion dollars, the city also has sectors such as automotive, sugar production and glass manufacturing.

Pune has several cinema halls and multiplexes, including the Inox Multiplex, Gold Adlabs and E Square Multiplex. There are many shopping malls in the city, including Westside, City Mall, Pune Central and Shopper Stop. Other areas for shopping in Pune include Laxmi Road, Tulsi Baug, Juna Bazaar, Mahatma Gandhi Road, Phule Market and Jangali Maharaj Road.

Jangali Maharaj Road, or J.M. Road, is not only popular for shopping, but as a hang out spot for college students. Coffee shops, Pizza Hut, McDonald's and KFC, along with banks and brand name stores are all here. Another attraction in the area is Sambhaji Park. Many coffee shops are available in the city, including Cafe Coffee Day, Costa Coffee and Cafe Chokolade.

Pune's cost of living varies according to area and budget. Mean prices for typical items is included from Numbeo below.

Pune Airport is located about 10 kilometers northeast of the city. It is both a domestic and international airport. Within the city itself, there is public transportation available via bus, auto rickshaw, taxi or rail. There are also plans to construct a new metro rail.

A metropolitan city that holds its own as a religious and musical centre, it also known for scholarship. Nehru called it "the Oxford and Cambridge of India." The area has become an IT hub, drawing several companies. With a literacy rate of 91.61 percent, Pune has a higher literacy rate than Delhi.

Marathi, the official language of Maharasthra, is the primary language spoken in Pune. Hindi, English and Gujarati are also used in the city.

Pune hosts a few festivals throughout the year, drawing audiences for music, film and dance. The Sawai Gandharva Bhimsen Mahotsav is a major music festival, with performances of Hindustani classical music taking place annually for the past 50 years. The Pune Festival takes place every year between August and September, a cultural event including dance, music, drama and sports. There is also the Pune International Film Festival, held in January. Dance, plays and music are part of the cultural life of Pune, which has several performance spaces and art galleries. Apart from classical music, Pune is known for techno and trance music.

Major festivals and religious events in Pune include Ganesh Chaturthi, Gudhi Padwa, Diwali, Dussehra, Holi, Eid, Janmashtami and Navratri. Religious sites in Pune include temples, mosques and other centres. The Parvati Temple and Chaturshringi Temple are two of the many temples in the city. Pune is also home to the Ohel David Synagogue, one of the few synagogues in India. Two mosques in the area are Chand Tara Masjid and Jama Masjid. There are also churches, gurudwaras and Jain temples in the city.

Typical cuisine in Pune is made from jowar (sorghum) and bajra (pearl millet). A few dishes common to the area are puran poli, pithla bakri, thali pith, amti and mastani. Mastani is a popular milkshake made in a variety of flavors, though often it is made with dried fruit. Shrewsbury biscuits from Kayani Bakery are a famous treat in Pune. Apart from south Indian food, Pune has other cuisines such as north Indian, Mediterranean, Mughlai, Chinese, Korean, Mexican and American available.

Restaurants in Pune include Vaishali, Malaka Spice, Dorabjee Restaurant and Kwality. Pune also has a Hard Rock Cafe, the third location to open in India.

If you're interested in watching or playing sports, Pune has a few popular ones such as cricket, hockey and football. For cricket, the Indian Premier League (IPL) team is the Pune Warriors. In hockey, the Pune Strykers have recently joined World Series Hockey. Pune's football team is the Pune Football Club (Pune FC), formed in 2007. An American football team, the Pune Marathas, are part of the Elite Football League of India, the recently started league backed by former National Football League (NFL) head coach Mike Ditka, among others. Pune has hosted the Commonwealth Youth Games (2008) and the National Games (1994).

Badminton is thought to have come to the city in 1873, when the Duke of Beaufort brought the game (then called Poona) from India to his home in England, called Badminton House. Though England takes the credit for inventing modern badminton, Asian countries currently dominate the game.

This work is licensed under a Creative Commons Attribution-ShareAlike 3.0 Unported License.